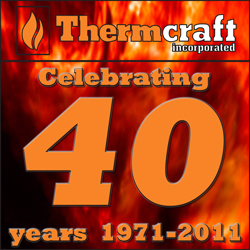 Thermcraft Inc. was founded on January 7, 1971, by current CEO Morris L. Crafton. The company began operations on the second floor of a downtown Winston-Salem building, but soon required additional space and moved to a larger facility the next year. Thermcraft currently operates in a state-of-the-art facility with 3600 square feet of office space and another 70,000 square feet of manufacturing space. The 12-acre tract of land provides additional space for future expansion.

Over the years, the company has made several investments to grow the business. In 1982, due to increasing demand for its heating equipment, the company added a high-bay area and a 10-ton bridge crane to the facility. At the same time, space for the manufacturing of diffusion heaters for the semiconductor industry was added. An off-site warehouse was built in 1989.

Overhead Bridge Crane
Custom manufacturing area with 10-ton bridge crane.
Last year, Thermcraft introduced the eXPRESS-LINE, a full new series of standard laboratory furnaces, ovens, and control systems, based on customer and market demands. The product offering includes a full line of both solid and split tube furnaces, as well a series of 1200°C (2000°F) rated box furnace and recirculating air box ovens for temperatures of 225°C (477°F) and 260°C (500°F). All of the eXPRESS-LINE equipment can be delivered within two weeks.

Box Furnaces
Box furnace manufacturing.
Thermcraft’s mission statement, “Through a team approach, we are dedicated to providing quality, cutting edge heating solutions in an efficient and timely manner,” has helped it to evolve into the company it is today, says Thomas M. Crafton, president. In addition, a diversity of markets and the ability to provide custom products specific to each customer have helped the company to thrive.

“Our success is from working with the customer to provide customized, specialized products for their processing requirements,” Crafton says. “We’ve been very customer oriented when supporting our customers; we treat them the way we would want to be treated.”